What Is a Crash Cart?

A crash cart in medical terms or a code cart as is popularly known, in some areas, is a set of trays, drawers, trolleys, used in the hospitals for moving of medical equipment that have to be used in an emergency or a casualty situation in order to save a person’s life. The medical crash cart carries instruments that are used for cardio pulmonary resuscitation and other medical supplies. It also functions as a support litter for the patient.

Contents of A Medical Crash Cart

The contents of the cart vary from place to place and from hospital to hospital but generally contain the medical kit and instruments that are needed to prevent a cardiac arrest. These include the below but can also include other than –

Hospitals use a code system (generally code blue) to indicate that there is a medical emergency and that people in the corridors are directed to move aside to let the medical crash carts make their way through to the patient. The medical crash cart is generally accompanied by physicians, pharmacists and nurses to help resuscitate the payment.

Why Are Medical Crash Carts So Important for Medical Facilities?

Any medical facility that is involved in the treatment of a person who is in the terminal stage or involves patients who might suddenly go into deterioration should keep a crash cart. The State Regulatory Agencies require certain cart to be made available. This would include hospitals, outpatient surgery centers, critical care centers and all other places where sedation is performed on a continual basis. Medical crash carts are needed specifically for people in cardiac care. The centers where diagnostic testing and Cardiac stress testing takes place also requires a crash cart. 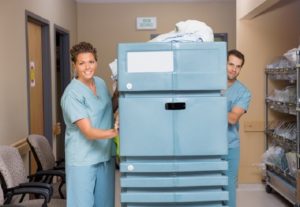 Maintenance of a Medical Crash Cart

The worst thing to happen will be to reach for a piece of medical equipment and find it inoperable because it is past its date of use. It is imperative that the crash cart be checked regularly and upkeep done so that all the contents can find its use in their emergency usage.

There is no law per se which states that these log books should be kept. However, for the safety of the patients, these must be maintained. There should also be some amount of calcium blocker which will help the patients in times of distress. The medical crash carts don’t have any specific requirements other than looking at cardiac and other respiratory problems and in resuscitation of patients. For the medical cart suppliers, can be vast such as retail outlets who will supply the equipment as well as the cardinal health agencies that have been authorized by law to do so. Again, these can also be supplied from medical agencies provided such emergency equipment’s and kit.

See also  How to Lose Weight as an Adult

One Reply to “Medical Crash Cart – A Thin Line of Necessity Between Life and Death!”